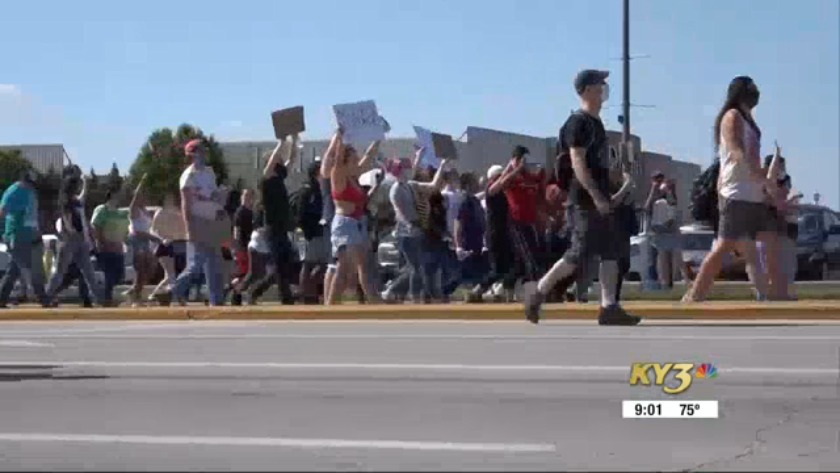 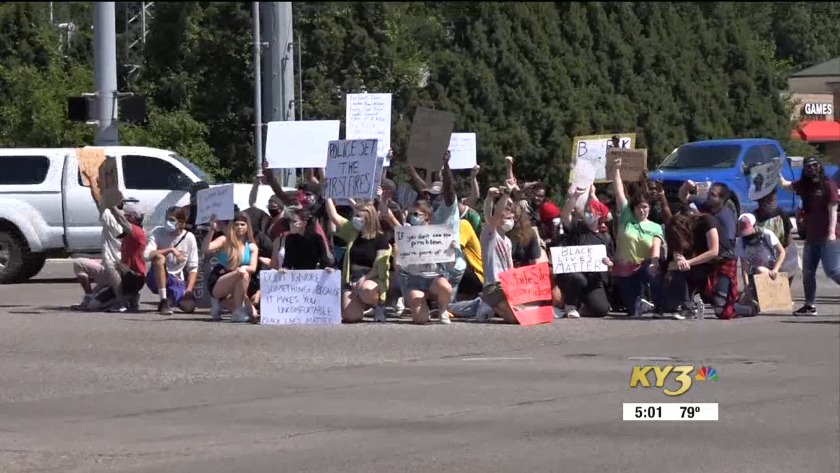 Second day of protests at Glenstone and Battlefield 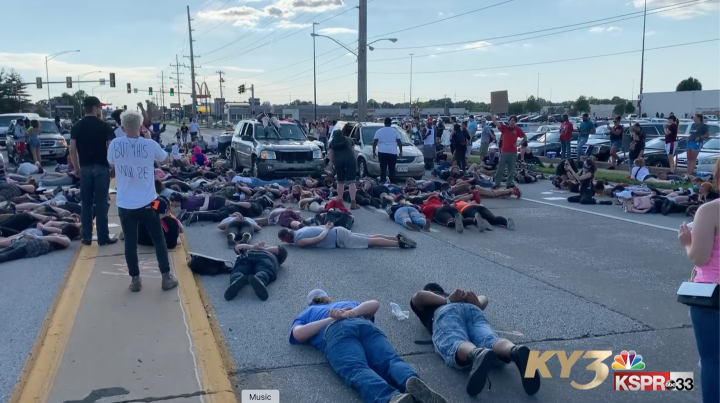 The protests come in response to the death of George Floyd. A bystander's video showed Minneapolis Officer Derek Chauvin kneeling on Floyd's neck earlier this week, even as Floyd begs for air and slowly stops talking and moving.

Sunday's protest, organized on Facebook as "Protest Against Police Brutality For George Floyd," began around 3 p.m. The protest began with gatherings near Glenstone Avenue and Battlefield Road in south Springfield.

Groups then marched down Battlefield Road, which included many protesters wearing face masks and holding signs.

HAPPENING NOW: Large crowds gather for a second straight day of protests near Glenstone and Battlefield in Springfield. pic.twitter.com/yCHl41w0fm

Some of the signs included messages of "White silence is violence," "I can't breathe" and "Justice for George Floyd."

Later in the afternoon, a group assembled just east of the Glenstone and Battlefield intersection, lying on the concrete of Battlefield Road for several minutes screaming “I can’t breathe!” Police had already blocked off the street before this happened.

MOMENTS AGO: Protesters lay Battlefield Road screaming “I can’t breathe!” The road was fully blocked off by protesters for several minutes. pic.twitter.com/jKC2jYY6uA

Wyatt Shaw and Mike Hilton were among the protesters who say their message is about peace and support for one another. They say they felt supported Sunday by Springfield police.

"For them to support us, and we've seen on social media where police have also had signs saying they are ready for justice, that's just an amazing thing," said Shaw. "The people can protest, but the people who actually work with those people have to also step up, and they have."

Other protesters believe more can be done for their voices to be heard.

"You have to get angry enough to want to create that positive change because, as long as you sit idle, you're not getting mad enough," said protester Larry Flenoid II. "It's just words on Facebook, a lot of talk, with no actions behind it."

Another protester told KY3 he wanted to be arrested to create awareness.

"Standing and shouting and marching is good, but if we can fill up the jail and actually disrupt things, we can inconvenience those who aren't standing out here, and make them aware," said protester Phil Rufkahr.

Springfield police say they offered to give Rufkahr a ticket, but he requested to go to jail. He was put in handcuffs and booked into jail, but has since been released.

Police have not notified KY3 of any additional arrests from the protests as of Sunday evening.

Springfield Police blocked off the intersection of Glenstone and Battlefield amid afternoon protests.

"We understand the desire and right to protest peacefully. In an effort to keep drivers and protesters safe, we do ask that drivers avoid that area again today," a spokesperson from the police department told KY3 ahead of Sunday's protest.

Saturday's protest also drew hundreds of people and stretched several hours near the same area. Springfield police reported no arrests Saturday, but a few instances that led to police reports.

Photos from Sunday's protest have been added to the gallery below.