Cause of burning hole in Midway, Ark. remains a mystery 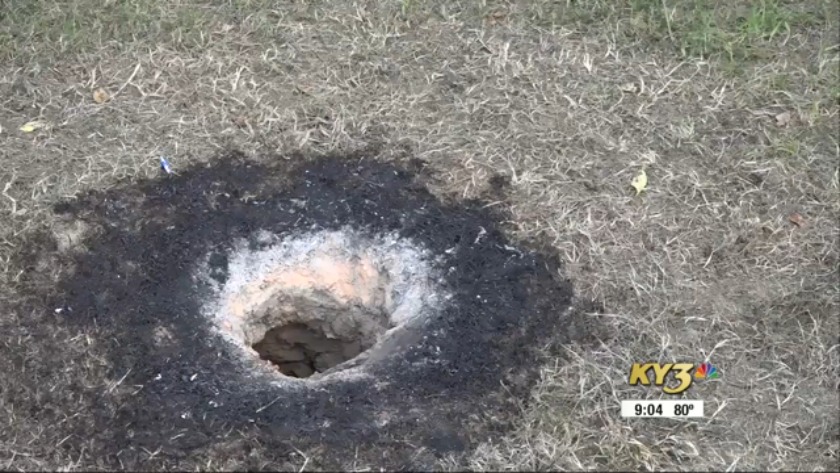 Cause of burning hole remains a mystery

Cause of burning hole still a mystery in Midway

MIDWAY, Ark. - It was an unusual call for the Midway Volunteer Fire Department.

A volleyball-sized hole was burning, with flames shooting out of it off Highway 5 South in Midway.

The homeowner who lives nearby said he came outside Monday morning to flames shooting from the hole up to the man's nose on this billboard.

Now county leaders are trying to figure out how the phenomenon started.

Baxter County Judge Mickey Pendergrass said, "We don't believe that the devil showed up, or the meteorites landed, or the big booms happened."

But the burning question is what caused the hole and the flames?

Pendergrass said, "We have contacted every utility company that is in the area. And we know for a fact now that they have lost no service they have nothing there. So there's nothing to do with utilities, which would be our first inclination to believe something was there."

No one knows where the hole ends.

A few geologists said they don't believe it was caused by a meteorite or lightning strike. And one with the Arkansas Geological Survey said how it started is a mystery.

Arkansas Geological Survey Professional Geologist Ty Johnson said,
"I can't think of any geologic situation that would allow that to happen. Not in this area. There's not any fossil fuels, or natural gas or petroleum that occurs in the area."

But he wants to dig for some possible answers.

Johnson said, "I imagine you would have to do some serious excavation to find out the source of that. We would be happy to go up there and look. I've already talked about going up there and looking at the area. There probably isn't a lot we can tell but we can get an idea of the general surroundings."

The homeowner said he mowed the lawn recently and did not notice any kind of hole there before the fire.

Pendergrass said, "What ignited it and what fueled it we still don't know. And it may remain forever a mystery."